If the stream all is defined on the collection messages, clients can connect via WebSocket to ws://mydomain.com/messages/_streams/all and receive real time notification of data changes occurring in the collection.

Modern web applications needs to react with promptness and efficiency to data changes in many contexts. RESTHeart Change Stream feature comes in handy to achieve this goal. 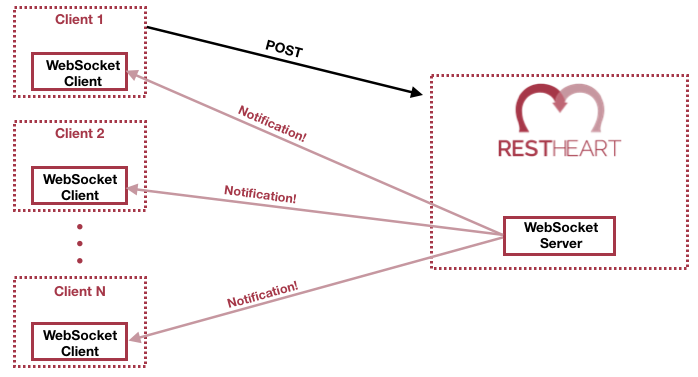 Exposing a WebSocket Server resource, clients may be promptly notified about these changes only if necessary, avoiding network expensive common practices like polling.

Starting from RESTHeart 5.3.0, when the stream collection metadata is modified or the collection or the db is deleted, all related WebSocket connections are closed and the change streams are consequently updated.

With RESTHeart up to 5.2 a restart of the server is required after modifying a stream definition, or deleting its collection, in order to disconnect all clients.

In RESTHeart, not only documents but also dbs and collections have properties. Some properties are metadata, i.e. they have a special meaning for RESTheart that influences its behavior.

The collection metadata property streams allows to declare change streams that client can watch for to be aware about changes to documents and bind them to given URI.

Change streams need to be defined as collection metadata. It is not possible to define a stream via a query parameter and this is by design: clients are not able to open up arbitrary change streams but only those defined (and tested) by the developers.

streams is an array of stream objects.

MongoDB does not allow to store fields with names starting with $ or containing dots (.), see Restrictions on Field Names on MongoDB’s documentation.

In order to allow storing stages with dollar prefixed operators or using the dot notation (to refer to properties of subdocuments), RESTHeart automatically and transparently escapes the properties keys as follows:

In RESTHeart 1.x, these escapes are not managed automatically: the developer had to explicitly use them; starting from version 2.0 this is not needed anymore.

Note that the $match stage specifies a condition on the name property using fullDocument::name. This is because the Change Event looks like:

Note between the _links collection property the URIs of the change streams (returned with ?rep=SHAL).

The query parameter avars allows to pass variables to the change stream.

For example, the previous example mine use a variable named “n”. If the variable is not passed via the avars qparam, the request fails.

Variables in stages or query

Variables can be used in change streams query as follows:

In case of change stream with stage parameter previous example, the variable was used to restrict notifications only to changes on documents with a property name matching the variable n:

By default RESTHeart makes sure that the aggregation variables passed as query parameters hasn’t got inside MongoDB operators.

This behavior is required to protect data from undesirable malicious query injection.

Even though is highly discouraged, is possible to disable this check by editing the following property into restheart.yml configuration file.